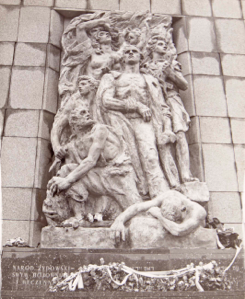 Bibliography
Illustrated: ICP accession no. 2010.93.1785.
Commentary
Poland Today: In the towns, the music of rebuilding machines is played for the country murdered by the Nazis. In the country, the tiny farms that have remained unchanged for centuries are helping to feed Britain. On the outskirts of the destroyed Ghetto is the monument to its four hundred thousand victims. The monument was made by a Jewish sculptor now living in the United States. It was erected with funds from subscriptions of America Jews of Polish origin, Warsaw, 1948.
Technique
Ferrotyped prints are processed in such a way that they are shiny. The print has a sensitive surface, usually thinner, because it was put through a press while still wet.
Materials
Ferrotyped prints have a sensitive surface, usually shiny and thinner, because they are put through a press while still wet. Ferrotyping makes the surface of the photograph smoother. Light does not scatter as much on a smoother surface, so this increases contrast. That makes ferrotyped images better for press photography.
Keywords Click a term to view the records with the same keyword
This object has the following keywords:
European Theater, Genocide, Genocide, Germany, Hate, Holocaust, Holocaust memorials, Judaism, Nazis, Poland, Polish American, Suffering, War crimes, War crimes, Warsaw, Warsaw Ghetto, World War II
Additional Images Click an image to view a larger version