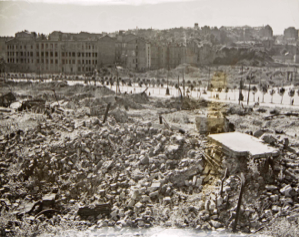 Commentary
Scenes in Kiev, capital of the Soviet Ukraine: Kiev is Russiaâs oldest city and was once the capital of Russia. Today the city is a semi-ruin, and it has an âAâ priority for reconstruction. The Germans carried away every valuable piece of machinery. There are no bulldozers, and reconstruction will take a long time. The center of Kiev, which was the modern section of the city with its big apartment buildings and department stores, is completely destroyed. The parts which were not damaged in the actual fighting were blown up by retreating Germans. The rubble is still piled up on both sides of the wide avenues of this fine Ukrainian city, 1947.
Technique
Ferrotyped prints are processed in such a way that they are shiny. The print has a sensitive surface, usually thinner, because it was put through a press while still wet.
Materials
Ferrotyped prints have a sensitive surface, usually shiny and thinner, because they are put through a press while still wet. Ferrotyping makes the surface of the photograph smoother. Light does not scatter as much on a smoother surface, so this increases contrast. That makes ferrotyped images better for press photography.
Keywords Click a term to view the records with the same keyword
This object has the following keywords:
European Theater, Germany, Kiev, Reconstruction, Rubble, Soviet Union, Street Scenes, World War II
Additional Images Click an image to view a larger version