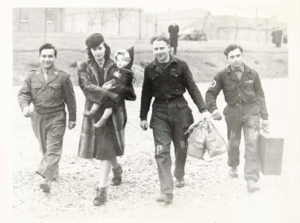 An American sergeant escorts Mrs. Pamela Jewell and her son Bobby toward a bus which will carry them to Perham, Downs, England for transportation to the United States, January 25, 1946
Vintage ferrotyped gelatin silver print on paper

Commentary
An American sergeant, left, escorts Mrs. Pamela Jewell and her son Bobby to a bus that will carry them to Perham, Downs, England. Two German POWs carry her luggage. As the wife of an American serviceman, Mrs. Jewell is traveling to the United States. She and her son are en route to 3109 Fourth Avenue South, Minneapolis, Minnesota, January 25, 1946.
Technique
Ferrotyped prints are processed in such a way that they are shiny. The print has a sensitive surface, usually thinner, because it was put through a press while still wet.
Materials
Ferrotyped prints have a sensitive surface, usually shiny and thinner, because they are put through a press while still wet. Ferrotyping makes the surface of the photograph smoother. Light does not scatter as much on a smoother surface, so this increases contrast. That makes ferrotyped images better for press photography.
Keywords Click a term to view the records with the same keyword
This object has the following keywords:
European Theater, Germany, Great Britain, Military families, Minneapolis, Pamela Jewell, Parent and Child, Perham Down, Prisoners of War, Soldiers, United States, World War II
Additional Images Click an image to view a larger version