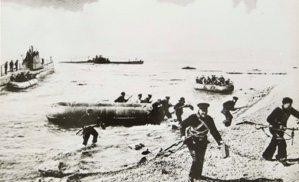 Related Objects
P2019.21.942 and P2019.21.943 were both assigned the collector number WW2USSR-085. They are two different photographs.
Commentary
Landing of Russian Marines: Russian Marines rush for the shore after landing in enemy-occupied territory. Rubber boats shuttled them from submarines. Latest reports from Moscow on August 3 state that Russian sailors and marines of the Sea of Azov Fleet effected a landing on the coast west of Kushchevka, on the Caucasus railroad 50 miles south of Rostov. They cut their way through the German rear to join Red Army men, August 1942.
Technique
Ferrotyped prints are processed in such a way that they are shiny. The print has a sensitive surface, usually thinner, because it was put through a press while still wet.
Materials
Ferrotyped prints have a sensitive surface, usually shiny and thinner, because they are put through a press while still wet. Ferrotyping makes the surface of the photograph smoother. Light does not scatter as much on a smoother surface, so this increases contrast. That makes ferrotyped images better for press photography.
Keywords Click a term to view the records with the same keyword
This object has the following keywords:
Caucasus, European Theater, Germany, Inflatable boats, Kushchevka, Landings, Marines, Red Army, Red Army, Rostov, Sailors, Soviet Marines, Soviet Sea of Azov Fleet, Soviet Union, Submarines, World War II
Additional Images Click an image to view a larger version