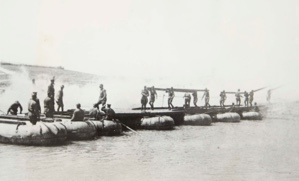 Protected by a smoke screen, engineers of the Soviet Army build a pontoon bridge across a river during recent Soviet Army maneuvers, June 1941
Vintage ferrotyped gelatin silver print on paper

Commentary
Red Army maneuvers as tension with Reich grows: Protected by a smoke screen, engineers of the Soviet Army build a pontoon bridge across a river during the recent huge maneuvers of the Soviet Army. Red soldiers from all branches of the service are being trained intensively, as relations with Germany grow worse. This picture arrived in the United States as tension between the Soviets and the Reich was declared to be at the breaking point, June 1941.
Technique
Ferrotyped prints are processed in such a way that they are shiny. The print has a sensitive surface, usually thinner, because it was put through a press while still wet.
Materials
Ferrotyped prints have a sensitive surface, usually shiny and thinner, because they are put through a press while still wet. Ferrotyping makes the surface of the photograph smoother. Light does not scatter as much on a smoother surface, so this increases contrast. That makes ferrotyped images better for press photography.
Keywords Click a term to view the records with the same keyword
This object has the following keywords:
Construction, Engineers, European Theater, Germany, Pontoon bridges, Red Army, Red Army, Rural Rivers, Training maneuvers, World War II
Additional Images Click an image to view a larger version