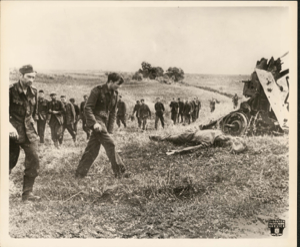 Provenance
Purchased by the Benton Museum of Art at Pomona College on August 12, 2020 from Edwynn Houk Gallery, New York.
Commentary
Nazi Prisoners Survey A Less-Fortunate Companion: German prisoners of the Red Army, shown marching to a post behind the lines, pass a less-fortunate companion who died beside his shattered field piece somewhere south of Orel. Many of the prisoners are wounded, all look heartily sick of the war.

The Battle of Kursk (July 5 - August 23, 1943) was an unsuccessful German assault on the Soviet salient around the city of Kursk, in Western Russia. The salient was a bulge in the Soviet lines that stretched 150 miles (240 km) from north to south and protruded 100 miles (160 km) westward into the German lines. In an attempt to recover the offensive on the Eastern Front, the Germans planned a surprise attack on the salient from both north and south, hoping to surround and destroy the Soviet forces within the bulge. The German assault forces consisted of almost 50 divisions, containing 900,000 troops, including 17 motorized or armored divisions having 2,700 tanks and mobile assault guns. But the Soviets had surmised the German attack plans beforehand and had withdrawn their main forces from the obviously-threatened positions within the salient. The Germans launched their attack on July 5, but they soon encountered deep antitank defenses and minefields, which the Soviets had placed in anticipation of the attack. At the height of the battle on July 12, the Soviets began to counterattack; they had built up significantly greater numbers of both troops and tanks by then. The Soviet's subsequent successes encouraged them to develop a broad offensive that recovered the nearby cities of Orel (now Oryol) on August 5 and Kharkov (now Kharkiv, Ukraine) on August 23. The Battle of Kursk was the largest tank battle in history, involving some 6,000 tanks, 2,000,000 troops, and 4,000 aircraft. It marked the decisive end of the German offensive capability on the Eastern Front and cleared the way for the great Soviet offensives of 1944â1945.
Technique
Ferrotyped prints are processed in such a way that they are shiny. The print has a sensitive surface, usually thinner, because it was put through a press while still wet.
Marks
On recto: Label in bottom right corner, "DISPATCH / PHOTO NEWS / SERVICE / INC. / NEW YORK".

On verso: Typewritten label attached in center, "NAZI PRISONERS SURVEY A LESS FORTUNATE COMPANION / German prisoners of the Red Army shown marching to a post behind the lines, pass / a less fortunate companion who died beside his shattered field piece, somewhere south / of Orel. Many of the prisoners are wounded, all look heartily sick of the war. / Produced Exclusively by Dispatch Photo News Service, New York City". Handwritten in graphite in top left corner, "DP-WW2-025".
Materials
Ferrotyped prints have a sensitive surface, usually shiny and thinner, because they are put through a press while still wet. Ferrotyping makes the surface of the photograph smoother. Light does not scatter as much on a smoother surface, so this increases contrast. That makes ferrotyped images better for press photography.
Keywords Click a term to view the records with the same keyword
This object has the following keywords:
Artillery, Battle of Kursk, Corpses, Death, Germany, Killed in action, Orel, Prisoners of War, Red Army, Red Army, Soldiers, World War II
Additional Images Click an image to view a larger version