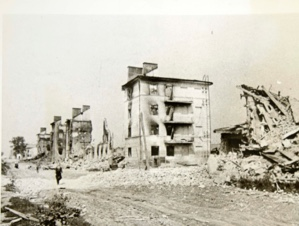 Commentary
This is the scene that met the returning residents of Orel, Russia, when the Red troops liberated the city in their crushing drive against the Germans. Gaunt, fire-scraped walls mark what had been a block of modern apartment buildings along Krasnoarmeiskaya Street, Orel, Russia, c. August 1943.

Operation Kutuzov was the first of the two counteroffensives launched by the Red Army as part of the Kursk Strategic Offensive Operation. It commenced on July 12, 1943 in the Central Russian Upland, against Army Group Center of the German Wehrmacht. The operation was named after General Mikhail Kutuzov, the Russian general credited with saving Russia from Napoleon during the French invasion of Russia in 1812. Operation Kutuzov was one of two large-scale Soviet operations launched as counteroffensives against Operation Citadel. The Operation began on July 12 and ended on August 18, 1943 with the capture of Orel and collapse of the Orel bulge.
Technique
Ferrotyped prints are processed in such a way that they are shiny. The print has a sensitive surface, usually thinner, because it was put through a press while still wet.
Materials
Ferrotyped prints have a sensitive surface, usually shiny and thinner, because they are put through a press while still wet. Ferrotyping makes the surface of the photograph smoother. Light does not scatter as much on a smoother surface, so this increases contrast. That makes ferrotyped images better for press photography.
Keywords Click a term to view the records with the same keyword
This object has the following keywords:
Apartments, Civilians, European Theater, Krasnoarmeiskaya Street, Kursk Strategic Offensive, Operation Citadel, Operation Kutuzov, Red Army, Red Army, Rubble, Street Scenes, Wehrmacht, World War II
Additional Images Click an image to view a larger version