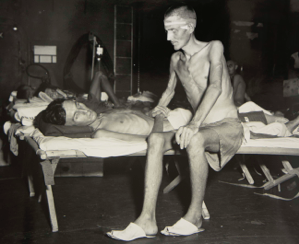 Commentary
Gordon James Clark (left), corporal of the Royal Artillery of Ipswich, Suffolk, England, and Norman Hill, gunner, Royal Artillery of Hendesbury, Staffordshire, England were walking skeletons when a mercy unit of the United States Pacific Fleet liberated them from a Japanese prison camp on Formosa [Taiwan]. Here they are relaxing on the deck of the USS Block Island, one of the liberation ships, September 1945.
Dimensions
Sheet: 8 1/16 x 9 7/8
Technique
Ferrotyped prints are processed in such a way that they are shiny. The print has a sensitive surface, usually thinner, because it was put through a press while still wet.
Materials
Ferrotyped prints have a sensitive surface, usually shiny and thinner, because they are put through a press while still wet. Ferrotyping makes the surface of the photograph smoother. Light does not scatter as much on a smoother surface, so this increases contrast. That makes ferrotyped images better for press photography.
Keywords Click a term to view the records with the same keyword
This object has the following keywords:
Atrocities, Casualties, Corp. Gordon James Clark, Formosa, Gordon James Clark, Gunners, Hendesbury, Ipswich, Japan, Norman Hill, Norman Hill, Pacific Theater, Prisoners of War, Royal Artillery Divisions, Starvation, Suffering, Survival, U.S. Pacific Fleet, United States Navy, USS Block Island, World War II
Additional Images Click an image to view a larger version

Your current search criteria is: Keyword is "MRD".