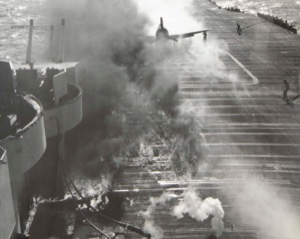 Commentary
Crash landing off Luzon: As aircraft carriers of the U.S. Pacific Fleet take the fight to the enemy, skilled pilots are occasionally forced to come through crashes like the one pictured here aboard an Essex class carrier. Despite the peril of burning planes and flight decks, the clocklike efficiency of crew and pilots turn incidents such as this into âroutineâ duty. Less than a half hour after the mishap, operation was back to normal, and the huge carrier was launching her planes once more. The photo shows flames roaring across the flight deck as the belly tank of a landing fighter tore loose from the plane and exploded. Next, the flames spread near the gun turrets and mounts as fighters rushed in to check the blaze. In the midst of the fire, firefighting experts in asbestos clothing rescued the pilot, who suffered burns and was later hospitalized. The blaze was checked and the danger was virtually over. The fire-fighting crew began âmopping upâ as their dangerous job was completed. Moments later the flight deck was clear, and fighter planes were roaring into the air again to blast the Japanese. These photos were taken on December 15 (west longitude date) during action in the Philippine Sea off Luzon.
Dimensions
Sheet: 7 15/16 x 9 7/8

Overall: 8 1/4 x 9 7/8
Technique
Ferrotyped prints are processed in such a way that they are shiny. The print has a sensitive surface, usually thinner, because it was put through a press while still wet.
Materials
Ferrotyped prints have a sensitive surface, usually shiny and thinner, because they are put through a press while still wet. Ferrotyping makes the surface of the photograph smoother. Light does not scatter as much on a smoother surface, so this increases contrast. That makes ferrotyped images better for press photography.
Keywords Click a term to view the records with the same keyword
This object has the following keywords:
Asbestos suits, Casualties, Essex class aircraft carriers, Fighters, Firefighters, Fires, Japan, Pacific Theater, Pilots, Plane crashes, Survival, U.S. Pacific Fleet, United States Navy, World War II
Additional Images Click an image to view a larger version

Your current search criteria is: Keyword is "MUC".