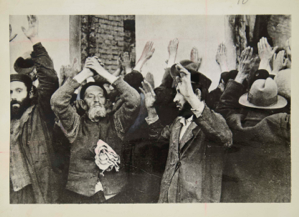 Under the threat of Nazi guns, these defenseless Jews hold their hands high and line up against a wall during a round-up in Warsawâs ghetto, September 1942
Vintage ferrotyped gelatin silver print with applied pigment on paper

Commentary
Jews Rounded Up in Warsaw: Warsaw, Poland. Under the threat of Nazi guns, these defenseless Jews hold their hands high and line up against a wall during a round-up in Warsawâs ghetto. Horrible tales of torture and separation of family units suffered by the Jews at the hands of the hated Gestapo have come out of Nazi-occupied Poland. This photo was found on the body of a German officer, evidently a participant in the round-up, who was killed before Moscow, September 1942.
Technique
Ferrotyped prints are processed in such a way that they are shiny. The print has a sensitive surface, usually thinner, because it was put through a press while still wet.
Materials
Ferrotyped prints have a sensitive surface, usually shiny and thinner, because they are put through a press while still wet. Ferrotyping makes the surface of the photograph smoother. Light does not scatter as much on a smoother surface, so this increases contrast. That makes ferrotyped images better for press photography.
Keywords Click a term to view the records with the same keyword
This object has the following keywords:
Atrocities, Civilians, European Theater, Genocide, Genocide, Gestapo, Hate, Judaism, Male Figures, Nazis, Occupation of Poland, Suffering, War crimes, War crimes, Warsaw, Warsaw Ghetto, World War II
Additional Images Click an image to view a larger version

Your current search criteria is: Keyword is "MZD" and [Object]Object Type is "Photography".