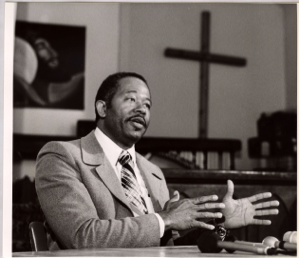 Black Panther Eldridge Cleaver at the Marshall Campus Center in Cheney, Washington, speaks about how his conversion to Christianity influenced him to return to the U.S., March 27, 1979
Vintage gelatin silver print with resin coating on paper
7 3/16 x 8 in. (18.26 x 20.32 cm)

Commentary
Black Panther Eldridge Cleaver at the Marshall Campus Center in Cheney, Washington, speaking about how his conversion to Christianity has influenced him to come back to the United States. He faces the possibility of a trial and jail sentence in connection with three counts of attempted murder and three counts of assault with a deadly weapon stemming from a 1968 shootout between Oakland police and the Black Panther Party.

Eldridge Cleaver (1935-1998) was an American writer and political activist who became an early leader of the Black Panther Party. In 1968, Cleaver wrote Soul On Ice, a collection of essays that, at the time of its publication, was praised by The New York Times Book Review as "brilliant and revealing." Cleaver became a prominent member of the Black Panthers. He held the titles Minister of Information and Head of the International Section of the Panthers while a fugitive from the United States criminal justice system in Cuba and Algeria.
Provenance
Donated to the Benton Museum of Art at Pomona College by Michael Mattis and Judy Hochberg on June 2, 2021.
Marks
On verso: Stamped in red ink near center: "S - R / MAR 27 1979". Handwritten in blue ink below stamps: "Eldridge Cleaver". Handwritten in black ink below "Eldridge Cleaver" inscription: "Black Panther". Handwritten in graphite at bottom left edge: "CVL-BP-086 2000". Stamped upside down in red ink near top center: "Oct 11 1983".
Dimensions
Sheet: 7 3/16 x 8 7/16
Keywords Click a term to view the records with the same keyword
This object has the following keywords:
Black Panther Party, Cheney, Christianity, Civil Rights Movements, Discrimination, Eldridge Cleaver, Imprisonment, Injustice, Male Portraits, Marshall Campus Center, Speeches, Trials
Additional Images Click an image to view a larger version

Your current search criteria is: Keyword is "NAT".