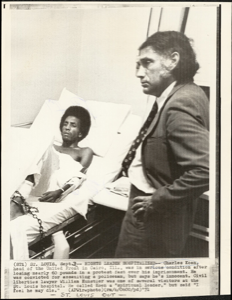 Commentary
Rights Leader Hospitalized: Charles Koen, head of the United Front in Cairo, Illinois, was in serious condition after losing nearly 60 pounds in a protest fast over his imprisonment. He was convicted for assaulting a policeman, but he says he is innocent. Civil liberties lawyer William Kunstler was one of several visitors at the St. Louis hospital. He called Koen a "spiritual leader," but said "I feel he may die." St. Louis, Missouri.

William Kunstler (1919-1995) was an American radical lawyer and Civil Rights activist, known for his politically-unpopular clients. Kunstler was an active member of the National Lawyers Guild, a board member of the American Civil Liberties Union (ACLU) and the co-founder of the Law Center for Constitutional Rights (CCR). Kunstler's defense of the Chicago Seven from 1969â1970 led the New York Times to label him "the country's most controversial and, perhaps, its best-known lawyer". Kunstler is also well known for defending members of the Catonsville Nine, Black Panther Party, Weather Underground Organization, the Attica Prison rioters, and the American Indian Movement.

Charles "Chuck" Koen (1945 â 2018) was an black minister and Civil Rights activist from Cairo, Illinois who served as Prime Minister of the Black Liberators and the Executive Director of the Black United Front Cairo. He founded the Black Liberators in St. Louis, Missouri in 1968. He later went on to lead nationally-noted campaigns in Cairo, Illinois, most notably a boycott of white-owned businesses. Koen was the subject of the FBI's Counterintelligence Program (COINTELPRO), an infiltration program sanctioned by FBI Chief J. Edgar Hoover and President Richard M. Nixon against black activists and activist groups in the 1960s and 1970s.The essence of this FBI ploy was to cause division in and amongst black leadership, in order to prevent organization and unity in black and poor communities around the nation. Those who were not killed or were not successfully infiltrated were constant subjects of criminal arrests and indictments.
Marks
On recto: typewritten title and date.
On verso: date stamp.
Materials
Wire photographs were originally transmitted over phonelines, then later, by satellite. They were first used in the early 1920s. Associated Press became a leader with this. After pigment touch-ups, etc., the print is put into a drum (like a drum scanner). The image gets converted into audio tones that are transmitted. The tones are received and beamed onto photo-sensitive paper. Wire photographs are copies without originals---they are hybrid, transmitted objects. (Britt Salvesen, Curator and Department Head, Photography Department, Los Angeles County Museum of Art, March 30-31, 2022)
Keywords Click a term to view the records with the same keyword
This object has the following keywords:
Assaulting an officer, Black United Front, Charles Koen, Civil Rights Movements, Hospitals, Hunger strikes, Imprisonment, Injustice, Male Portraits, Racial Discrimination, St. Louis, William Kunstler
Additional Images Click an image to view a larger version

Your current search criteria is: Keyword is "NAT".