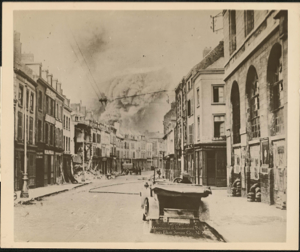 
Huge incendiary shells are bursting and setting fire to all the buildings in Amiens â and the Germans want peace with honor!, 1918
Vintage ferrotyped gelatin silver print on paper

Provenance
Purchased by the Benton Museum of Art at Pomona College on August 12, 2020 from Edwynn Houk Gallery, New York.
Commentary
Retreating Germans Burn Towns! The result of a terrific German bombardment of Amiens is seen in this photograph. Huge incendiary shells are bursting and setting fire to all the buildings â and the Germans want peace with honor! British official photo, World War I.

The Battle of Amiens, also known as the Third Battle of Picardy, was the opening phase of the Allied offensive that began on August 8, 1918. This offensive was later known as the Hundred Days Offensive, and it ultimately led to the end of the First World War. Allied forces advanced over 7 miles (11 km) on the first day, one of the greatest advances of the war. General Henry Rawlinson's British Fourth Army playing the decisive role (with 9 of its 19 divisions supplied by the fast-moving Australian Corps of Lt. General John Monash and Canadian Corps of Lt. General Arthur Currie). The battle is also notable for its effects on both sides' morale and the large number of surrendering German forces. This led Erich Ludendorff to later describe the first day of the battle as "the black day of the German Army". Amiens was one of the first major battles involving armored warfare.
Marks
Credited in plate with typeset credit and title on label affixed to verso.
Technique
Ferrotyped prints are processed in such a way that they are shiny. The print has a sensitive surface, usually thinner, because it was put through a press while still wet.
Materials
Ferrotyped prints have a sensitive surface, usually shiny and thinner, because they are put through a press while still wet. Ferrotyping makes the surface of the photograph smoother. Light does not scatter as much on a smoother surface, so this increases contrast. That makes ferrotyped images better for press photography.
Keywords Click a term to view the records with the same keyword
This object has the following keywords:
Air raids, Amiens, Battle of Amiens, Fires, France, Germany, Incendiary bombs, World War I
Additional Images Click an image to view a larger version