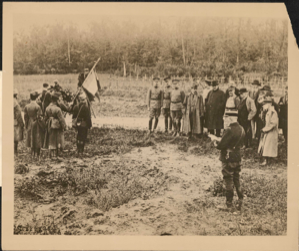 
Commander Waflu reads an address at the graves of the American soldiers who fought and died at Belleau Wood, June 1918
Vintage ferrotyped gelatin silver print on paper

Provenance
Purchased by the Benton Museum of Art at Pomona College on August 12, 2020 from Edwynn Houk Gallery, New York.
Commentary
Photos of the Latest U.S. Army and Navy War News---France Honors Graves of American Heroes: Commander Waflu reads an address at the graves of the American soldiers who fought and died at Belleau Wood, which the Americans captured. Belleau Wood has been renamed âThe Wood of the Americansâ. French official photo, France.

The Battle of Belleau Wood (June 1 - 26, 1918) occurred during the German Spring Offensive in World War I, near the Marne River in France. The battle was fought between the U.S. 2nd Division (under the command of Major General Omar Bundy) and 3rd Division with French and British forces, against an assortment of German units. On June 26, the 3rd Battalion 5th Marines, under command of Major Maurice E. Shearer, made an attack on Belleau Wood. They were supported by two companies of the 4th Machine Gun Battalion and the 15th Company of the 6th Machine Gun Battalion. This finally cleared the forest of Germans. On that day, Major Shearer submitted a report simply stating, "Woods now U.S. Marine Corps entirely". This ended one of the bloodiest and most ferocious battles U.S. forces would fight in the war.
Marks
Credited in plate with typeset credit and title on label affixed to verso.
Technique
Ferrotyped prints are processed in such a way that they are shiny. The print has a sensitive surface, usually thinner, because it was put through a press while still wet.
Materials
Ferrotyped prints have a sensitive surface, usually shiny and thinner, because they are put through a press while still wet. Ferrotyping makes the surface of the photograph smoother. Light does not scatter as much on a smoother surface, so this increases contrast. That makes ferrotyped images better for press photography.
Keywords Click a term to view the records with the same keyword
This object has the following keywords:
Battle of Belleau Wood, Belleau Wood, Commander Waflu, Commander Waflu, Death, France, Germany, Graves, Great Britain, Heroes, Killed in action, Major Maurice E. Schearer, Marne River, U.S. Second Infantry, U.S. Third Battalion, U.S. Third Infantry, World War I
Additional Images Click an image to view a larger version