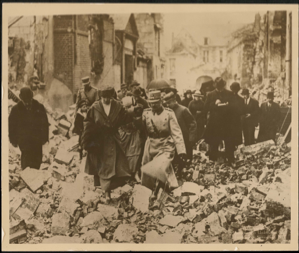 
Queen Marie of Romania visits the ruins of historic Noyon while on an inspection tour of the French fighting front, c. 1919
Vintage ferrotyped gelatin silver print on paper

Provenance
Purchased by the Benton Museum of Art at Pomona College on August 12, 2020 from Edwynn Houk Gallery, New York.
Commentary
Queen of Romania to Visit United States! Queen Marie of Romania visits the ruins of historic Noyon while on an inspection tour of the French fighting front. She has recently visited England and is now making plans to pay a visit to the United States, France.

Marie of Romania (Marie Alexandra Victoria, October 29, 1875 â July 18, 1938), also known as Marie of Edinburgh, was the last Queen of Romania as the wife of King Ferdinand I. After the outbreak of World War I, Marie urged Ferdinand to ally himself with the Triple Entente and declare war on Germany, which he eventually did in 1916. During the early stages of fighting, Bucharest was occupied by the Central Powers. Marie, Ferdinand and their five children took refuge in Moldavia. The queen and her three daughters acted as nurses in military hospitals there, caring for soldiers who were wounded or afflicted by cholera. After the war, on 1 December 1918, the historical region of Transylvania united with the Old Kingdom, following Bessarabia and Bukovina. Marie, now queen of Greater Romania, attended the Paris Peace Conference of 1919. She campaigned there for international recognition of the enlarged Romania.
Marks
Credited in plate with typeset credit and title on label affixed to verso.
Technique
Ferrotyped prints are processed in such a way that they are shiny. The print has a sensitive surface, usually thinner, because it was put through a press while still wet.
Materials
Ferrotyped prints have a sensitive surface, usually shiny and thinner, because they are put through a press while still wet. Ferrotyping makes the surface of the photograph smoother. Light does not scatter as much on a smoother surface, so this increases contrast. That makes ferrotyped images better for press photography.
Keywords Click a term to view the records with the same keyword
This object has the following keywords:
France, Noyon, Queen Marie of Romania, Queen Marie of Romania, Reviews, Romania, Rubble, Street Scenes, World War I
Additional Images Click an image to view a larger version