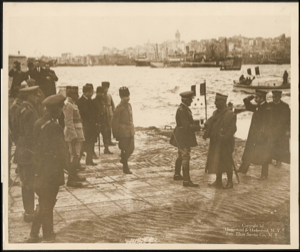 
General Louis Franchet d'EspÃ¨rey, conqueror of Bulgaria, arrives from Salonica and is greeted at the pier in Istanbul by General Sir Edmund Allenby, who conquered the Turkish forces and liberated Palestine, December 18, 1918
Vintage ferrotyped gelatin silver print on paper

Provenance
Purchased by the Benton Museum of Art at Pomona College on August 12, 2020 from Edwynn Houk Gallery, New York.
Commentary
Two Great Conquerors Meet In Constantinople: This is one of the historic photographs of the war. Two conquerors meet in Constantinople. General Louis Franchet d'EspÃ¨rey, conqueror of Bulgaria, arrives from Salonica and is greeted at the pier in Istanbul by General Sir Edmund Allenby, who conquered the Turkish forces and liberated Palestine. Istanbul, Turkey.

Generals D'Esperey and Allenby meet in Constantinople after the Turkish WWI Armistice. By December 30, 1918 Following a visit to Paris in November to present Greece's territorial claims to the Peace Conference to be opened, Venizelos reasserts these claims in a memorandum addressed to British Prime Minister David Lloyd George and covering all of Western Anatolia, from opposite Rhodes (or Castellorizo) to the Sea of Marmara. Field Marshal Edmund Henry Hynman Allenby, 1st Viscount Allenby, GCB, GCMG, GCVO (April 23, 1861 â May 14, 1936) was an English soldier and British Imperial Governor. He fought in the Second Boer War. He also fought in the First World War, in which he led the British Empire's Egyptian Expeditionary Force (EEF) against the Ottoman Empire during the Sinai and Palestine Campaign in the conquest of Palestine.
Marks
Credited in plate with typeset credit and title on label affixed to verso.
Technique
Ferrotyped prints are processed in such a way that they are shiny. The print has a sensitive surface, usually thinner, because it was put through a press while still wet.
Materials
Ferrotyped prints have a sensitive surface, usually shiny and thinner, because they are put through a press while still wet. Ferrotyping makes the surface of the photograph smoother. Light does not scatter as much on a smoother surface, so this increases contrast. That makes ferrotyped images better for press photography.
Keywords Click a term to view the records with the same keyword
This object has the following keywords:
Armistice of 11 November 1918, Docks, France, Franchet d'EspÃ¨rey, Great Britain, Istanbul, Louis Franchet d'EspÃ¨rey, Louis Franchet d'EspÃ¨rey, Meetings, Ottoman Empire, Post-war world, Sir Edmund Allenby, Sir Edmund Allenby, World War I
Additional Images Click an image to view a larger version