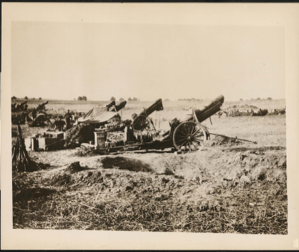 Provenance
Purchased by the Benton Museum of Art at Pomona College on August 12, 2020 from Edwynn Houk Gallery, New York.
Commentary
Photos of Latest U.S. Army and Navy War News: American Guns Blast Pathway! American Artillery is seen ripping up the trenches, roads, fields and woods northeast of Soissons. These 155mm guns played an important part in the capture of Soissons. They are making the enemy lines so hot that the Germans still advance towards home.

The Battle of Soissons (1918) (also known as the Battle of the Soissonnais and of the Ourcq) was a battle fought on the Western Front during World War I. Waged from July 18 - 22, 1918 between the French (with American and British assistance) and the German armies, the battle was part of the much larger Allied Aisne-Marne counter-offensive. It followed the final German Spring Offensive, Operation Marneschutz-Reims (also known as the Friedensturm or peace offensive). The primary objective of the attack was to cut both the Soissons â ChÃ¢teau-Thierry road and the railroad running south from Soissons to ChÃ¢teau-Thierry. As these were the main supply routes for the German forces in the Marne salient, cutting them would severely impair the Germans' ability to supply its armies defending it. This would force the Germans to retreat and give up their gains. This battle marked the turning point of the war, as the Germans would be on the defensive for the remainder of the conflict.
Marks
Credited in plate with typeset credit and title on label affixed to verso.
Technique
Ferrotyped prints are processed in such a way that they are shiny. The print has a sensitive surface, usually thinner, because it was put through a press while still wet.
Materials
Ferrotyped prints have a sensitive surface, usually shiny and thinner, because they are put through a press while still wet. Ferrotyping makes the surface of the photograph smoother. Light does not scatter as much on a smoother surface, so this increases contrast. That makes ferrotyped images better for press photography.
Keywords Click a term to view the records with the same keyword
This object has the following keywords:
155 mm guns, Battle of Soissons, France, Germany, Soissons, U.S. Artillery, World War I
Additional Images Click an image to view a larger version