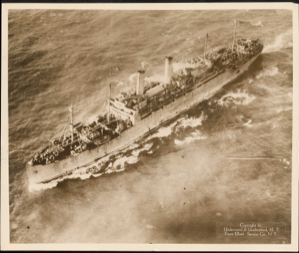 Provenance
Purchased by the Benton Museum of Art at Pomona College on August 12, 2020 from Edwynn Houk Gallery, New York.
Commentary
The George Washington Brings President Home: President Woodrow Wilson has left Paris and is now on his way to the United States on the transport USS George Washington. The President will land in Boston. The steamer George Washington photographed at sea from an airplane.

When the U.S. declared war in April 1917, the German passenger luxury liner George Washington was moored in a New York harbor and was seized as spoils of war. This coal-fired vessel was refurbished as a troop transport for our military. At the outbreak of WWII, the retrofitted oil-fired USS George Washington returned to service, where she was used as a troop transport through the war and after. This great ship, which transported thousands of troops during both World Wars, was decommissioned in 1947.
Marks
Credited in plate with typeset credit and title on label affixed to verso.
Technique
Ferrotyped prints are processed in such a way that they are shiny. The print has a sensitive surface, usually thinner, because it was put through a press while still wet.
Materials
Ferrotyped prints have a sensitive surface, usually shiny and thinner, because they are put through a press while still wet. Ferrotyping makes the surface of the photograph smoother. Light does not scatter as much on a smoother surface, so this increases contrast. That makes ferrotyped images better for press photography.
Keywords Click a term to view the records with the same keyword
This object has the following keywords:
Aerial photography, Oceans, Paris Peace Conference, USS George Washington, Woodrow Wilson, World War I
Additional Images Click an image to view a larger version