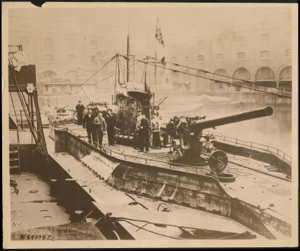 
The Peace Conference in Paris will determine what to do with the surrendered German Navy. Here, the U-boat 155 is in London, awaiting orders from Paris., 1919
Vintage ferrotyped gelatin silver print on paper

Provenance
Purchased by the Benton Museum of Art at Pomona College on August 12, 2020 from Edwynn Houk Gallery, New York.
Commentary
To Sink or Not to Sink â The Big Question in Paris: The Peace Conference in Paris seems unable to determine what disposition to make of the surrendered German Navy. Some of the Powers want the fleet divided among the Allies -- other delegates urge that it be sunk. The photo shows the big German U-boat 155 at London, awaiting orders from Paris, London, England.

On January 18, 1919, in Paris, France, some of the most powerful people in the world meet to begin the long, complicated negotiations that would officially mark the end of the First World War. Leaders of the victorious Allied powersâFrance, Great Britain, the United States and Italyâ would make most of the crucial decisions in Paris over the next six months. For most of the conference, U.S. President Woodrow Wilson struggled to support his idea of a âpeace without victoryâ and make sure that Germany, the leader of the Central Powers and the major loser of the war, was not treated too harshly. On the other hand, Prime Ministers Georges Clemenceau of France and David Lloyd George of Britain argued that punishing Germany adequately and ensuring its weakness was the only way to justify the immense costs of the war. In the end, Wilson compromised on the treatment of Germany in order to push through the creation of his pet project, an international peacekeeping organization called the League of Nations. Representatives from Germany were excluded from the peace conference until May, when they arrived in Paris and were presented with a draft of the Versailles Treaty.
Marks
On recto: Clear label attached near bottom left corner, "U.S. Official Photo / From Underwood & Underwood, N. Y. / From Elliott Service Co., N.Y." Printed in white ink beneath label, "US OFFICIAL [underlined]". Handwritten in black ink beneath stamp, partially obscured by label, "5189018CC".

On verso: Typewritten label attached in center, "TO SINK OR NOT TO SINK - THE BIG QUESTION IN PARIS / The Peace Conference in Paris seems unable to de- / termine what disposition to make of the surrendered / German Navy. Some of the Powers want this fleet / divided among the Allies - other delegates urge that it / be sunk. The photo shows the big German U-boat / 155 at London, awaiting orders from Paris. / UNDERWOOD & UNDERWOOD NEWS PHOTOGRAPHS ELLIOTT SERVICE CO. EXCLUSIVE DISTRIBUTORS 141-145 West 36th St., NEW YORK B 1815". Handwritten in graphite in top left corner, "UU-048".
Technique
Ferrotyped prints are processed in such a way that they are shiny. The print has a sensitive surface, usually thinner, because it was put through a press while still wet.
Materials
Ferrotyped prints have a sensitive surface, usually shiny and thinner, because they are put through a press while still wet. Ferrotyping makes the surface of the photograph smoother. Light does not scatter as much on a smoother surface, so this increases contrast. That makes ferrotyped images better for press photography.
Keywords Click a term to view the records with the same keyword
This object has the following keywords:
Allied Powers, Armistice of 11 November 1918, German surrender, Imperial German Navy, London, Paris, Paris Peace Conference, Ship captures, Treaty of Versailles, U-155, World War I
Additional Images Click an image to view a larger version