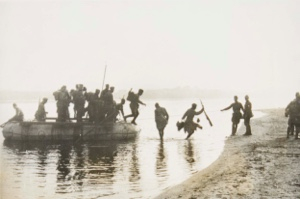 Red Army troops in the Moscow district disembark from a pontoon boat they used to cross a river during maneuvers, September 1938
Vintage ferrotyped gelatin silver print on paper

Commentary
Soviet Army in fall maneuvers: Soviet troops engaged in the autumn maneuvers of the Red Army in the Moscow military district are shown disembarking from a pontoon boat on which they crossed a river. Like the rest of Europe, Russia has hundreds of thousands of men engaged in maneuvers as war looms, Moscow, Russia, September 1938.
Technique
Ferrotyped prints are processed in such a way that they are shiny. The print has a sensitive surface, usually thinner, because it was put through a press while still wet.
Materials
Ferrotyped prints have a sensitive surface, usually shiny and thinner, because they are put through a press while still wet. Ferrotyping makes the surface of the photograph smoother. Light does not scatter as much on a smoother surface, so this increases contrast. That makes ferrotyped images better for press photography.
Keywords Click a term to view the records with the same keyword
This object has the following keywords:
Cityscapes, European Theater, Fall, Germany, Moscow, Pontoon boats, Red Army, Red Army, Training maneuvers, Urban Rivers, World War II
Additional Images Click an image to view a larger version