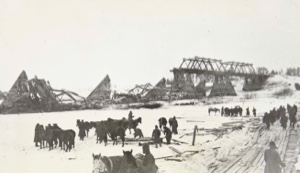 Red troops cross on the ice of the Ugra River, near Yukhnov, in pursuit of Germans, June 1942
Vintage ferrotyped gelatin silver print on paper

Commentary
Yukhov, Russia: Red troops cross the ice of the Ugra River, near Yukhnov. They are pursuing Germans who they drove out of the town. Germans blew up bridge (in background) in a futile attempt to stop onrushing Reds. This photo was taken during recent sharp action in this area, southwest of Moscow. On June 8th further brisk action was reported in the area, June 1942.
Technique
Ferrotyped prints are processed in such a way that they are shiny. The print has a sensitive surface, usually thinner, because it was put through a press while still wet.
Materials
Ferrotyped prints have a sensitive surface, usually shiny and thinner, because they are put through a press while still wet. Ferrotyping makes the surface of the photograph smoother. Light does not scatter as much on a smoother surface, so this increases contrast. That makes ferrotyped images better for press photography.
Keywords Click a term to view the records with the same keyword
This object has the following keywords:
Bridges, European Theater, Germany, Horses, Ice, Red Army, Red Army, Rubble, Soldiers, Ugra River, Winter, World War II, Yukhnov
Additional Images Click an image to view a larger version