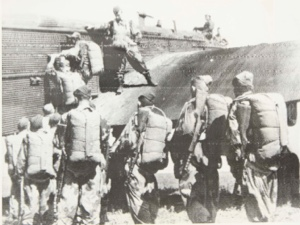 Commentary
Soviet parachute troops board a huge Russian transport for drills, preceding operations over enemy territory. Reports from London state that a Russian group of parachutists landed near a concentration camp in Poland. They set the prisoners free and supplied them with guns and ammunition that they are now using to carry on guerrilla warfare. Erich Guttart, known as âthe Little Butcherâ, Chief of the Lublin Gestapo in Poland, was killed when his men clashed with the guerrillas. They are still being supplied with weapons dropped from Russian planes, July 1942.
Materials
Wire photographs were originally transmitted over phonelines, then later, by satellite. They were first used in the early 1920s. Associated Press became a leader with this. After pigment touch-ups, etc., the print is put into a drum (like a drum scanner). The image gets converted into audio tones that are transmitted. The tones are received and beamed onto photo-sensitive paper. Wire photographs are copies without originals---they are hybrid, transmitted objects. (Britt Salvesen, Curator and Department Head, Photography Department, Los Angeles County Museum of Art, March 30-31, 2022)
Keywords Click a term to view the records with the same keyword
This object has the following keywords:
Concentration Camps, Erich Guttart, European Theater, Germany, Gestapo, Guerrillas, Lublin, Nazis, Red Army, Soldiers, Soviet Airborne, Soviet Union, Training maneuvers, Transports, World War II
Additional Images Click an image to view a larger version