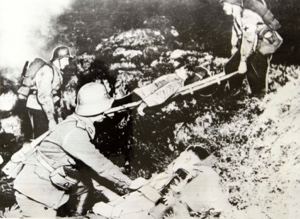 Commentary
Members of the Finnish Army Ambulance Corps are taking their wounded to field dressing stations on the Karelian Front after a Soviet attack. Casualties were heavy, but not nearly as heavy as those of the Red Army invaders. Neutral estimates place Russian dead at 30,000. Today, apparently despairing of cracking the Mannerheim Line across the Karelian Isthmus by direct assault, the Red invaders contented themselves with long range shelling, somewhere in Karelia, December 1939.
Dimensions
Sheet: 6 9/16 x 8 3/8
Materials
Wire photographs were originally transmitted over phonelines, then later, by satellite. They were first used in the early 1920s. Associated Press became a leader with this. After pigment touch-ups, etc., the print is put into a drum (like a drum scanner). The image gets converted into audio tones that are transmitted. The tones are received and beamed onto photo-sensitive paper. Wire photographs are copies without originals---they are hybrid, transmitted objects. (Britt Salvesen, Curator and Department Head, Photography Department, Los Angeles County Museum of Art, March 30-31, 2022)
Keywords Click a term to view the records with the same keyword
This object has the following keywords:
Casualties, European Theater, Finland, Finnish Army Ambulance Corps, Injury, Karelia, Land bombardments, Mannerheim Line, Red Army, Red Army, Soldiers, Stretchers, World War II
Additional Images Click an image to view a larger version