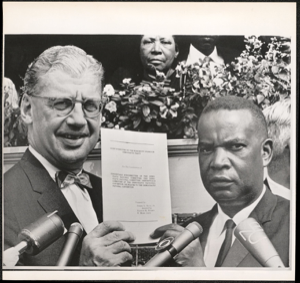 Mississippi Freedom Democratic Party leaders Joseph Rauh and Aaron Henry display a brief in Atlantic City that they will submit to the Credential Subcommittee of the Democratic Convention, August 21, 1964
Vintage wire photograph on paper
6 3/4 x 8 5/16 in. (17.15 x 21.11 cm)

Commentary
"Freedom Party" Seeks Convention Seats: two leaders of the Mississippi Freedom Democratic Party display a brief in Atlantic City, New Jersey that they will submit to the Credential Subcommittee of the Democratic Convention in an effort to be seated in place of the regular Mississippi Democratic delegation. At left is Joseph Rauh, a Washington DC attorney and Civil Rights leader who prepared the brief, and at right is Aaron Henry, head of the 68-member delegation.

Joseph Louis Rauh, Jr. (1911-1992) was one of the United States' foremost Civil Rights and civil liberties lawyers and is best known for his championing of various Civil Rights causes. In 1947, he helped found Americans for Democratic Action, alongside Eleanor Roosevelt and Hubert Humphrey, among others. Starting as a Democratic National Convention delegate in July 1948, he was a leader that year in writing up the Civil Rights plank for Humphrey. In the letter of support promoting his award of the Presidential Medal of Freedom, its authors described the plank as "the foundation for all of the human rights and equal protection laws that have since been enacted." In 1959, Rauh successfully represented Quaker printer David H. Scull before the US Supreme Court in Scull v. Virginia ex rel. Committee on Law Reform & Racial Activities. The case concerned aggressive and unclear questioning by the prosegregation chairman of a Virginia legislative committee, which had led to a contempt citation the Supreme Court overturned. In 1963, Rauh marched with Martin Luther King, Jr. at the March on Washington. Rauh also lobbied Congress for the passage of many Civil Rights bills, having a hand in the passage of the Civil Rights Act of 1964, the Voting Rights Act of 1965, and the Civil Rights Act of 1968. In addition, Rauh fought against McCarthyism and was a long-time executive board member of the National Association for the Advancement of Colored People. He was posthumously awarded the Presidential Medal of Freedom, the nation's highest civilian honor, by President Bill Clinton on November 30, 1993. Aaron Henry (July 2, 1922 â May 19, 1997) was an American Civil Rights leader, politician, and head of the Mississippi branch of the NAACP. He was one of the founders of the Mississippi Freedom Democratic Party, which tried to seat their delegation at the 1964 Democratic National Convention.
Bibliography
Associated Press ID #778328982335
Marks
On verso: date stamps and typewritten label with title and date affixed.
Materials
Wire photographs were originally transmitted over phonelines, then later, by satellite. They were first used in the early 1920s. Associated Press became a leader with this. After pigment touch-ups, etc., the print is put into a drum (like a drum scanner). The image gets converted into audio tones that are transmitted. The tones are received and beamed onto photo-sensitive paper. Wire photographs are copies without originals---they are hybrid, transmitted objects. (Britt Salvesen, Curator and Department Head, Photography Department, Los Angeles County Museum of Art, March 30-31, 2022)
Keywords Click a term to view the records with the same keyword
This object has the following keywords:
Aaron Henry, Atlantic City, Civil Rights Movements, Credential Subcommittee, Delegates, Injustice, Joseph Rauh, Male Portraits, Mississippi Freedom Democratic Party, Racial Discrimination
Additional Images Click an image to view a larger version