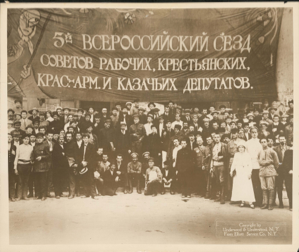 
Delegates of the Fifth Russian Congress of Soviets are grouped before their banner, 1918
Vintage ferrotyped gelatin silver print on paper

Provenance
Purchased by the Benton Museum of Art at Pomona College on August 12, 2020 from Edwynn Houk Gallery, New York.
Commentary
Delegates of the Russian Congress! Delegates of the Fifth Russian Congress of Soviets are grouped before their banner. They are composed of members of the Red Army, peasants, soldiers, sailors and Cossack deputies. The result of this meeting was the killing of Wilhelm von Mirbach, the German Ambassador, World War I.

The Fifth All-Russian Congress of Soviets of Workers Peasants, Soldiers and Red Army Deputies was held July 4 â 10, 1918. A decree was passed that "linked citizenship to military service and obliged all healthy men aged 18â40 years to come forward" and fight for the Red Army in the Russian Civil War. The Left Socialist-Revolutionaries had 352 delegates compared to 745 Bolsheviks, out of 1132 total. The Left SRs raised disagreements on the suppression of rival parties, the death penalty, and mainly, the Treaty of Brest-Litovsk. The Left SR Uprising broke out during this Congress. Its suppression marked the end of Left SR participation in the Congress of Soviets.
Marks
Credited in plate with typeset credit and title on label affixed to verso.
Technique
Ferrotyped prints are processed in such a way that they are shiny. The print has a sensitive surface, usually thinner, because it was put through a press while still wet.
Materials
Ferrotyped prints have a sensitive surface, usually shiny and thinner, because they are put through a press while still wet. Ferrotyping makes the surface of the photograph smoother. Light does not scatter as much on a smoother surface, so this increases contrast. That makes ferrotyped images better for press photography.
Keywords Click a term to view the records with the same keyword
This object has the following keywords:
Cossack, Delegates, Fifth Russian Congress of Soviets, Flags, Peasants, Red Army, Red Army, Sailors, Soldiers, World War I
Additional Images Click an image to view a larger version