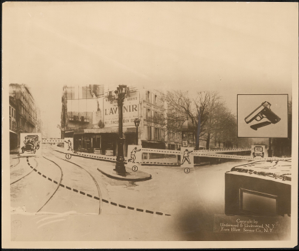 
Three positions taken by attempted assassin Ãmile Cottin when he fired on the car of Premier Georges Clemenceau in Paris. The photograph shows the revolver he used., February 19, 1919
Vintage ferrotyped gelatin silver print on paper

Provenance
Purchased by the Benton Museum of Art at Pomona College on August 12, 2020 from Edwynn Houk Gallery, New York.
Commentary
Attempted Assassination of Clemenceau: This is the first photograph to reach America showing the attempted assassination of Premier Georges Clemenceau of France. It shows three positions taken by the assassin, Ãmile Cottin, when he fired on the auto, and it shows the revolver he used. The shots were fired at point "3". Three of them wounded the Premier, Paris, France.

Louis Ãmile Cottin (1896â1936, nicknamed "Milou") was a French militant anarchist who is best known for the attempted assassination of Georges Clemenceau. At his trial, he declared himself a Bolshevik and later published a declaration entitled âWhy I Shot Clemenceauâ. He explained that his motivation for killing Clemenceau was the latter's unwillingness to allow Russian soldiers to return to their homeland after the revolution, sending them to Africa instead or even forcing them to fight against the Russian communists.
Marks
Credited in plate with typeset credit and title on label affixed to verso.
Technique
Ferrotyped prints are processed in such a way that they are shiny. The print has a sensitive surface, usually thinner, because it was put through a press while still wet.
Materials
Ferrotyped prints have a sensitive surface, usually shiny and thinner, because they are put through a press while still wet. Ferrotyping makes the surface of the photograph smoother. Light does not scatter as much on a smoother surface, so this increases contrast. That makes ferrotyped images better for press photography.
Keywords Click a term to view the records with the same keyword
This object has the following keywords:
Assassinations, Bolsheviks, Cars, Diagrams, Ãmile Cottin, Georges Clemenceau, Handguns, Hate, Hate crimes, Paris, Street Scenes, World War I
Additional Images Click an image to view a larger version

Your current search criteria is: Keyword is "OKT".