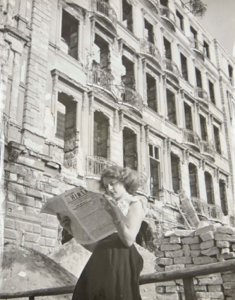 
Famous hotels on the Danube were burnt down during the siege and are not yet rebuilt, but pretty girls come down to the famous promenade--the Korzo, Budapest, 1948
Vintage ferrotyped gelatin silver print on paper
9 13/16 x 8 in. (24.92 x 20.32 cm)

Commentary
Inside Hungary: The Hungary of yesterday remains a myth. If the name of Kossuth, her great fighter for freedom, is mentioned today, people only think of the Budapest Danube bridge named after him. And the Danube is red again with the blood of political victims. From time immemorial, Hungarian oppressors sent them to their deaths in that river. A row of famous hotels along the Danube was burnt down during the siege and has not yet been rebuilt, but pretty girls come down to the famous promenade called Korzo, Budapest, 1948.
Technique
Ferrotyped prints are processed in such a way that they are shiny. The print has a sensitive surface, usually thinner, because it was put through a press while still wet.
Materials
Ferrotyped prints have a sensitive surface, usually shiny and thinner, because they are put through a press while still wet. Ferrotyping makes the surface of the photograph smoother. Light does not scatter as much on a smoother surface, so this increases contrast. That makes ferrotyped images better for press photography.
Keywords Click a term to view the records with the same keyword
This object has the following keywords:
Cityscapes, Danube, Female Figures, Germany, Hotels, Korzo, Post-war world, Reading, Reconstruction, Rubble, World War II
Additional Images Click an image to view a larger version