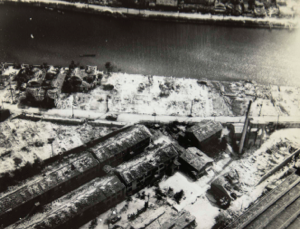 Commentary
After the Fall: The awesome power of the atomic bomb can be seen in the remains of the once-thriving city of Hiroshima after the bomb fell on August 6, 1945. In the blink of an eye, the city of 300,000 was reduced to twisted steel and burning ruins by the effects of one bomb. Only the strongest concrete structures survived the blast. Image taken August 6, 1945, printed July 27, 1965.

During the final stage of World War II, the United States detonated two nuclear weapons over the Japanese cities of Hiroshima and Nagasaki on August 6 and 9, 1945, respectively. This was done with the consent of the United Kingdom, as required by the Quebec Agreement. The two bombings killed 129,000â226,000 people, most of whom were civilians. They remain the only use of nuclear weapons in the history of armed conflict. In the final year of the war, the Allies prepared for what was anticipated to be a very costly invasion of the Japanese mainland. This undertaking was preceded by a conventional and firebombing campaign that devastated 67 Japanese cities. The war in Europe had concluded when Germany signed its instrument of surrender on May 8, 1945. As the Allies turned their full attention to the Pacific Theater, Japan faced the same fate. The Allies called for the unconditional surrender of the Imperial Japanese armed forces in the Potsdam Declaration on July 26, 1945 â the alternative being "prompt and utter destruction". Japan ignored the ultimatum, and the war continued. By August 1945, the Allies' Manhattan Project had produced two types of atomic bombs, and the 509th Composite Group of the United States Army Air Forces (USAAF) was equipped with the specialized silver plate version of the Boeing B-29 Super Fortress that could deliver them from Tinian in the Mariana Islands. Orders for atomic bombs to be used on four Japanese cities were issued on July 25. On August 6, one of the modified B-29s dropped a uranium gun-type ("Little Boy") bomb on Hiroshima. Three days later, on August 9, a plutonium implosion ("Fat Man") bomb was dropped by another B-29 on Nagasaki. The bombs immediately devastated their targets. Over the next two to four months, the acute effects of the atomic bombings killed 90,000â146,000 people in Hiroshima and 39,000â80,000 people in Nagasaki; roughly half of the deaths in each city occurred on the first day. Large numbers of people continued to die from the effects of burns, radiation sickness, and other injuries, compounded by illness and malnutrition, for many months afterward. In both cities, most of the dead were civilians, although Hiroshima had a sizable military garrison. On August 15âsix days after the bombing of Nagasaki and the Soviet Union's declaration of warâJapan announced its surrender to the Allies. On September 2 in Tokyo Bay, the Japanese government signed the instrument of surrender, which effectively ended World War II. The effects of the bombings on the social and political character of subsequent world history and popular culture have been studied extensively, and the ethical and legal justification for the bombings is still debated to this day.
Dimensions
Sheet: 8 x 10
Materials
Wire photographs were originally transmitted over phonelines, then later, by satellite. They were first used in the early 1920s. Associated Press became a leader with this. After pigment touch-ups, etc., the print is put into a drum (like a drum scanner). The image gets converted into audio tones that are transmitted. The tones are received and beamed onto photo-sensitive paper. Wire photographs are copies without originals---they are hybrid, transmitted objects. (Britt Salvesen, Curator and Department Head, Photography Department, Los Angeles County Museum of Art, March 30-31, 2022)
Keywords Click a term to view the records with the same keyword
This object has the following keywords:
B-29s, Casualties, Civilians, Desolation, Hiroshima, Hiroshima bombing, Invasion of Japan, Japan, Nuclear Attacks, Nuclear bombs, Pacific Theater, Post-war world, Potsdam Declaration, Rubble, Surrender of Japan, U.S. 509th Composite Group, World War II
Additional Images Click an image to view a larger version