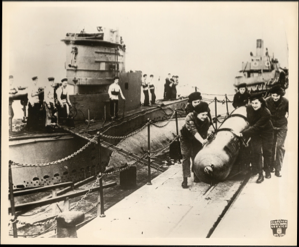 Provenance
Purchased by the Benton Museum of Art at Pomona College on August 12, 2020 from Edwynn Houk Gallery, New York.
Commentary
Wrens Handle Navy's "Tin Fish": British Wrens, the counterpart of American Waves, are working on torpedo maintenance. This is a job formerly carried out by men who are now fighting. Wrens are shown wheeling a torpedo out for loading into a submarine soon to leave on patrol.

The Women's Royal Naval Service (WRNS), popularly and officially known as the Wrens, was the women's branch of the United Kingdom's Royal Navy. The United States Naval Reserve (Women's Reserve), better known as the WAVES (Women Accepted for Volunteer Emergency Service), was the women's branch of the United States Naval Reserve during World War II. It was established on July 21, 1942 by the U.S. Congress and signed into law by President Franklin D. Roosevelt on July 30. This authorized the U.S. Navy to accept women into the Naval Reserve as commissioned officers and at the enlisted level, effective for the duration of the war plus six months. The purpose of the law was to release officers and men for sea duty and replace them with women in shore establishments.
Technique
Ferrotyped prints are processed in such a way that they are shiny. The print has a sensitive surface, usually thinner, because it was put through a press while still wet.
Marks
On verso: Typewritten label attached in center, "WRENS HANDLE NAVY'S 'TIN FISH' / Working on torpedo maintenance, a job which formerly was carried out by men now / fighting, are British Wrens, the American counterpart of Waves. They are shown / wheeling a torpedo out for loading in a submarine shortly to leave on patrol. / Produced Exclusively by Dispatch Photo News Service, New York City". Handwritten in graphite in top left corner, "DP-WW2-030".
Materials
Ferrotyped prints have a sensitive surface, usually shiny and thinner, because they are put through a press while still wet. Ferrotyping makes the surface of the photograph smoother. Light does not scatter as much on a smoother surface, so this increases contrast. That makes ferrotyped images better for press photography.
Keywords Click a term to view the records with the same keyword
This object has the following keywords:
European Theater, Maintenance, Maintenance, Submarines, Torpedoes, Women in war, Women's Royal Naval Service, World War II
Additional Images Click an image to view a larger version

Your current search criteria is: Keyword is "PBJ" and [Object]Nationality is ".