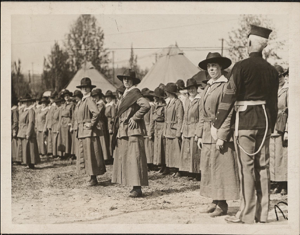 
300 prominent women receive instructions at the National Service School in Chevy Chase, Maryland. They will learn many skills that will be useful in time of war., early 1916
Vintage ferrotyped gelatin silver print on paper
5 15/16 x 7 7/8 in. (15.08 x 20 cm)

Provenance
Purchased by the Benton Museum of Art at Pomona College on August 12, 2020 from Edwynn Houk Gallery, New York.
Commentary
Socially Prominent Women Clad in Khaki Go to Camp to Study "Preparedness": Chevy Chase, Maryland near Washington D.C. is the place to study the art of preparedness. President Woodrow Wilson opened the camp of the National Service School for Women there on May 1. Three hundred women who are prominent in Washington D.C. social life have donned khaki. Like their brothers in the Military Preparedness camp, they are studying things which will enable them to be of great service, should the time ever come when our country is involved in war. The women will learn food conservation, signal work, wireless and plain telegraphy, first aid, hygiene and other valuable skills. The photograph shows some of the 300 women receiving their instructions, Washington, D.C.

The First National Service School was founded in early 1916 by Elizabeth Elcott Poe and Vylla Poe Wilson in Chevy Chase, Maryland. The camp opened in May 1916 to great fanfare. President Wilson and high-ranking officials in the Navy, Marine Corps, and Army attended the opening ceremony.
Dimensions
Sheet: 6 5/8 x 8 1/2
Technique
Ferrotyped prints are processed in such a way that they are shiny. The print has a sensitive surface, usually thinner, because it was put through a press while still wet.
Materials
Ferrotyped prints have a sensitive surface, usually shiny and thinner, because they are put through a press while still wet. Ferrotyping makes the surface of the photograph smoother. Light does not scatter as much on a smoother surface, so this increases contrast. That makes ferrotyped images better for press photography.
Keywords Click a term to view the records with the same keyword
This object has the following keywords:
Chevy Chase, National Service School for Women, Socialites, Training, United States, Women in war, World War I
Additional Images Click an image to view a larger version

Your current search criteria is: Keyword is "PBJ" and [Object]Nationality is ".