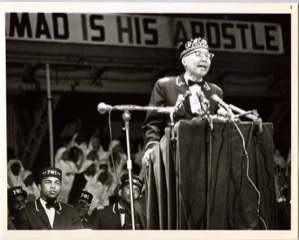 Commentary
Muhammad Talks to Followers: Elijah Muhammad, co-founder of the Black Muslims, addresses members of his sect in Chicago. At left is heavyweight champion Cassius Clay, who joined the sect and took the Muslim name of Muhammad Ali.

Elijah Muhammad (born Elijah Robert Poole October 7, 1897 â February 25, 1975) was a black religious leader who led the Nation of Islam (NOI) from 1934 until his death in 1975. He was a mentor to Malcolm X, Louis Farrakhan and Muhammad Ali, as well as his own son, Warith Deen Mohammed.

Muhammad Ali (born Cassius Marcellus Clay Jr., 1942-2016) was an American professional boxer, activist, and philanthropist. Nicknamed "The Greatest", he is widely regarded as one of the most significant and celebrated sports figures of the 20th century and one of the greatest boxers of all time. At the age of 22, in 1964, he won the World Heavyweight Championship from Sonny Liston in a major upset. He then changed his name from Cassius Clay, which he called his "slave name", to Muhammad Ali. He set an example of racial pride for black Americans and resistance to white domination during the Civil Rights Movement. As a Muslim, Ali was initially affiliated with Elijah Muhammad's Nation of Islam (NOI) and advocated their black separatist ideology. He later disavowed the NOI, adhering to Sunni Islam, practicing Sufism, and supporting racial integration, like his former mentor Malcolm X. In 1966, two years after winning the heavyweight title, Ali further antagonized the white establishment by refusing to be drafted into the U.S. military, citing his religious beliefs and opposition to American involvement in the Vietnam War. He was eventually arrested, found guilty of draft evasion charges, and stripped of his boxing titles. He successfully appealed the decision to the U.S. Supreme Court, which overturned his conviction in 1971. By that time he had not fought for nearly four years, and thereby lost a period of peak performance as an athlete. Ali's actions as a conscientious objector to the war made him an icon for the larger counterculture generation.
Provenance
Donated to the Benton Museum of Art at Pomona College by Michael Mattis and Judy Hochberg on June 2, 2021.
Bibliography
Library of Congress Prints and Photographs Online Catalog reproduction number LC-USZ62-124482. Associated Press ID # 6701010248.
Marks
On verso: Typewritten label affixed upside down, "APN / SUNDAY / ILLUSTRATIONS / 50 ROCKEFELLER PLAZA, NEW YORK, N.Y. 10020 / AP NEWSFEATURES PHOTO / PLEASE CREDIT / (For release Sundy, July 1, 1984, / with Sharon Cohen's Chicago, APN story / slugged Black Muslims.) / MUHAMMAD TALKS TO FOLLOWERS / Elijah Muhammad. co-founder of / the Black Muslims, addresses members / of his sect in Chicago on Feb. 26, / 1967. Then heavyweight champion / Cassius Clay, who took the Muslim / name of Muhammad Ali, is seated / to the left of the dais. / jzc-6/14/84 fls sil360". On label, "Elijah Muhammad" circled in red ink. On label, "Black Mus" circled in graphite. Handwritten on label in black ink: "29.8"". Handwritten at bottom left egde: "CVL-LDX-335.3 3000".
Dimensions
Sheet: 8 x 10
Keywords Click a term to view the records with the same keyword
This object has the following keywords:
Black Muslims, Chicago, Civil Rights Movements, Discrimination, Honorable Elijah Muhammad, Injustice, Muhammad Ali, Muhammad Ali, Nation of Islam, Speeches
Additional Images Click an image to view a larger version