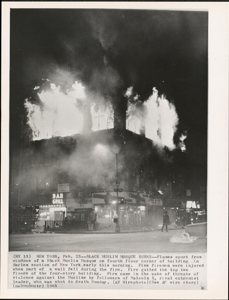 Commentary
Black Muslim Mosque Burns: flames shoot from windows of a Black Muslim Mosque on the fourth floor corner of a building in Harlem early this morning. Five firemen were injured during the fire when part of a wall fell. Fire gutted the top two floors of the four-story building. The fire came in the wake of threats of violence against the Muslim by followers of Malcolm X, the rival extremist leader who was shot to death Sunday.

Masjid Malcolm Shabazz, formerly known as Mosque No. 7, is a Sunni Muslim mosque in Harlem, New York. It was formerly a Nation of Islam mosque, where Malcolm X preached until he left it for Sunni Islam in 1964. Opened as Temple No. 7 of the Nation of Islam at the Harlem YMCA in 1946, it was moved to Lenox Casino at 102 West 116th Street on the southwest corner of Lenox Avenue. When Malcolm X split from Elijah Muhammad in 1964, he started a Sunni Muslim mosque named The Muslim Mosque Inc. The successor to that mosque is The Mosque of Islamic Brotherhood Inc. at 130 West 113th Street in Harlem. In January 1964, Elijah Muhammad stripped Malcolm X of his offices. Muhammad promoted James 3X as the new minister of Mosque No. 7. Mosque No. 7 was destroyed in a bombing in 1965 after Malcolm X's assassination, forcing Nation of Islam to move the mosque to 106 West 127th Street. The building was redesigned by Sabbath Brown. In 1976, Wallace D. Muhammad, the new leader of the Nation of Islam, renamed the mosque Malcolm Shabazz Mosque, or Masjid Malcolm Shabazz, to honor the memory and contributions of Malcolm X.
Marks
On recto: typewritten title and date.
On verso: date stamp.
Materials
Wire photographs were originally transmitted over phonelines, then later, by satellite. They were first used in the early 1920s. Associated Press became a leader with this. After pigment touch-ups, etc., the print is put into a drum (like a drum scanner). The image gets converted into audio tones that are transmitted. The tones are received and beamed onto photo-sensitive paper. Wire photographs are copies without originals---they are hybrid, transmitted objects. (Britt Salvesen, Curator and Department Head, Photography Department, Los Angeles County Museum of Art, March 30-31, 2022)
Keywords Click a term to view the records with the same keyword
This object has the following keywords:
Assassinations, Black Muslims, Civil Rights Movements, Fires, Harlem, Injustice, Malcolm X, Masjid Malcolm Shabazz, Nation of Islam, Racial Discrimination
Additional Images Click an image to view a larger version