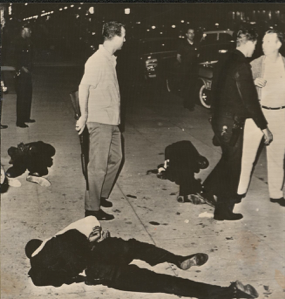 Commentary
Muslim Cultists Wounded In Brawl with Police: three blacks, members of an anti-white Muslim cult, are guarded by a plain clothes officer carrying a shotgun. They lie handcuffed and wounded on a street in South Los Angeles early today after a riot that 75 policemen were called upon to quell. One cultist was killed, and one policeman was wounded and two others were badly beaten. The brawl started when a two men jumped a policeman after he stopped to question another man who was selling clothing out of an automobile.

In Los Angeles, a confrontation outside a mosque between two LAPD officers and two members of the Nation of Islam led to a shootout that killed one of the men. When a group of Black Muslims came out of the building, the situation escalated. 75 police were eventually involved. When the confrontation was over, mosque secretary Ronald Stokes was dead, and six other Muslims and seven policemen were injured. The two policemen claimed self-defense in the face of an attack, while the Muslims said that their secretary, Ronald Stokes, had been beaten and shot at close range. They also said officers fired into an unarmed crowd. The incident heightened racial tensions in L.A. It first brought Malcolm X to national attention, and led to a split between him and Nation of Islam leader Elijah Muhammad.
Marks
On verso: typewritten label with title and date, and newspaper caption with date stamp affixed.
Materials
Wire photographs were originally transmitted over phonelines, then later, by satellite. They were first used in the early 1920s. Associated Press became a leader with this. After pigment touch-ups, etc., the print is put into a drum (like a drum scanner). The image gets converted into audio tones that are transmitted. The tones are received and beamed onto photo-sensitive paper. Wire photographs are copies without originals---they are hybrid, transmitted objects. (Britt Salvesen, Curator and Department Head, Photography Department, Los Angeles County Museum of Art, March 30-31, 2022)
Keywords Click a term to view the records with the same keyword
This object has the following keywords:
Arrest, Black Muslims, Civil Rights Movements, Fighting, Injury, Injustice, Nation of Islam, Police, Racial Discrimination, South Central Los Angeles, Street Scenes
Additional Images Click an image to view a larger version