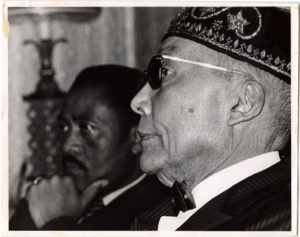 Commentary
The head of the Black Muslims is Elijah Muhammad. Ministers of the movement across the country, including John X of Tampa, quote him constantly when talking about their religion. Muslims, commonly known as "Black Muslims" are called everything in the media from "anti-white cult," "Negro separatist movement," "religious sect," to "Negro extremist group." They have been around since the late 1920s but began receiving intense national attention some eight or nine years ago, Chicago.

Elijah Muhammad (born Elijah Robert Poole; October 7, 1897 â February 25, 1975) was a black religious leader, who led the Nation of Islam (NOI) from 1934 until his death in 1975. He was a mentor to Malcolm X, Louis Farrakhan and Muhammad Ali, as well as his own son, Warith Deen Mohammed.
Provenance
Donated to the Benton Museum of Art at Pomona College by Michael Mattis and Judy Hochberg on June 2, 2021.
Marks
On verso: Newspaper cutting affixed to near top left corner, "By PEGGY PETERMAN / Of The Times Staff / He's soft-spoken, conservatively dressed, / mannerly and prays five times a day. / Sounds like the description of a mild-mannered / person anybody could get along with. But that's the / description of members of a religion made up of a / "nation of black people,"' feared possibly more than / the Black Panthers. / MUSLIMS, commonly known as "Black Mus- / lims" and called everything in the media from / "anti-white cult," "Negro separatist movement," / "religious sect," to "Negro extremist group," have / been around since the late 1920's but received intense / national attention some eight or nine years ago. / Muslims name as their founder, W. C. Fard and / refer to him as Allah, the God that they worship. / The head of the "nation" is the Honorable Elijah / Muhammad who states he received the mantle of / leadership from Fard. / They have 52 temped nationwide and several / universities called University of Islams. Headquar- / ters for Muslims is Chicago [remaining text illegible]". Newspaper cutting affixed in top left corner: "The head of the Black Muslims is Elijah / Muhammad. Ministers of the movement across / the country including John X of Tampa quote / him constantly when talking about their religion.". Both newspaper cuttings are stamped in red ink: "JUL 8 1972". Handwritten in graphite at bottom left edge: "CVL-LDX-370 2500". White adhesive label adhered in upper left corner printed in black ink: "13A-AM-19".
Dimensions
Sheet: 8 x 10 1/16
Technique
Ferrotyped prints are processed in such a way that they are shiny. The print has a sensitive surface, usually thinner, because it was put through a press while still wet.
Materials
Ferrotyped prints have a sensitive surface, usually shiny and thinner, because they are put through a press while still wet. Ferrotyping makes the surface of the photograph smoother. Light does not scatter as much on a smoother surface, so this increases contrast. That makes ferrotyped images better for press photography.
Keywords Click a term to view the records with the same keyword
This object has the following keywords:
Black Muslims, Chicago, Civil Rights Movements, Discrimination, Honorable Elijah Muhammad, Injustice, Male Portraits, Nation of Islam
Additional Images Click an image to view a larger version