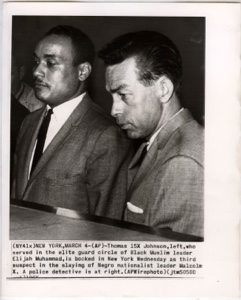 Commentary
Thomas 15X Johnson, center, is booked as the third suspect in the slaying of black nationalist leader Malcolm X, in New York. Johnson served in the elite guard circle of Elijah Muhammad's Muslim organization. Like the other two suspects, Johnson was booked on homicide charges. Detective John Keeley is at right.

Thomas 15X Johnson was identified by witnesses as one of the gunmen involved in the slaying of Malcolm X, along with Talmadge Hayer (also known as Thomas Hagan) and Norman 3X Butler. All three were convicted of first degree murder in March 1966 and sentenced to life in prison. At trial, Hayer confessed, but refused to identify the other assailants except to assert that they were not Butler and Johnson. In 1977 and 1978, he signed affidavits reasserting Butlerâs and Johnsonâs innocence, naming four other Nation members as participants in the murder or its planning. These affidavits did not result in the case being reopened. Johnson would eventually change his name to Khalil Islam. After being let out of jail in 1987, he worked a variety of jobs, including a stint as a drug counselor in Poughkeepsie. He also taught Islam in the Bronx.
Provenance
Donated to the Benton Museum of Art at Pomona College by Michael Mattis and Judy Hochberg on June 2, 2021.
Bibliography
Associated Press ID # 291391402606.
Marks
On recto: Typewritten label below image, "(NY41x)NEW YORK, MARCH 4-(AP)-Thomas 15X Johnson, left, who / served in the elite guard circle of Black Muslim leader / Elijah Muhammad, is booked in New York Wednesday as third / suspect in the slaying of Negro nationalist leader Malcolm / X. A police detective is at right. (APWirephoto)(jtm50500 / [remaining text illegible]".

On verso: Stamped in an oval in purple ink near top center: "The Daily Telegraph / RECEIVED / MAR 1965 / PICTURE LIBRARY". Written in blue ink inside the oval stamp is "3638" but this has been crossed out in graphite. Stamped in purple ink near center: "SPECIAL REPRODUCTION [text illegible] / NATIONALLS - UP TO 6 SQ. INS. / Â£10-10-0d / over 6 DQ. INS. AND UP TO / 50 SQ. INS. Â£17-17-0d / LARGER SIZES PRO RATA / ASSOCIATED PRESS PHOTO / PROVINCIALS Â£6-6-0 MINIMUM / UP TO 5O SQUARE INCHES / OVER 50 SQUARE INCHES / PRO RATA". Handwritten in graphite in top left corner: "CVL-LDX-425.1 3000". Handwritten in black ink near top right corner: "A144.232".
Dimensions
Sheet: 10 x 8 1/8
Materials
Wire photographs were originally transmitted over phonelines, then later, by satellite. They were first used in the early 1920s. Associated Press became a leader with this. After pigment touch-ups, etc., the print is put into a drum (like a drum scanner). The image gets converted into audio tones that are transmitted. The tones are received and beamed onto photo-sensitive paper. Wire photographs are copies without originals---they are hybrid, transmitted objects. (Britt Salvesen, Curator and Department Head, Photography Department, Los Angeles County Museum of Art, March 30-31, 2022)
Keywords Click a term to view the records with the same keyword
This object has the following keywords:
Arrest, Assassinations, Black Muslims, Civil Rights Movements, Death, Detective John Keeley, Discrimination, Injustice, Malcolm X, Male Portraits, Nation of Islam, Thomas 15X Johnson
Additional Images Click an image to view a larger version