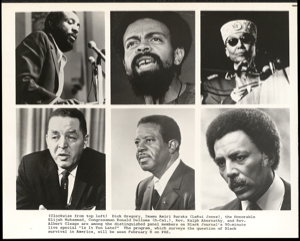 Commentary
Clockwise from to left: Dick Gregory, Imamu Amiri Baraka (LaRoi Jones), the Honorable Elijah Muhammad, Congressman Ronald Dellums (Democrat, California), Reverend Ralph Abernathy, and the Reverend Albert Cleage are among the distinguished panel members on Black Journal's 90-minute live special "Is it too late?" The program, which surveys the question of Black survival in America, will be seen on PBS.

Dick Gregory (1932-2017) was a black comedian, Civil Rights activist, social critic, writer, conspiracy theorist, entrepreneur, and occasional actor. During the 1960s, Gregory became a pioneer in stand-up comedy for his "no-holds-barred" sets, in which he mocked bigotry and racism. He performed primarily to black audiences at segregated clubs until 1961, when he became the first black comedian to successfully cross over to white audiences. Gregory was at the forefront of political activism in the 1960s, when he protested the Vietnam War and racial injustice.

Amiri Baraka (born Everett LeRoi Jones; October 7, 1934 â January 9, 2014), previously known as LeRoi Jones and Imamu Amear Baraka, was an American writer of poetry, drama, fiction, essays and music criticism. He was the author of numerous books of poetry and taught at several universities, including the State University of New York at Buffalo and the State University of New York at Stony Brook. He received the PEN/Beyond Margins Award in 2008 for "Tales of the Out and the Gone". Baraka's career spanned nearly 50 years, and his themes range from black liberation to white racism. Some poems that are always associated with him are "The Music: Reflection on Jazz and Blues", "The Book of Monk", and "New Music, New Poetry", works that draw on topics from the worlds of society, music, and literature. Baraka's poetry and writing have attracted both high praise and condemnation. In the black community, some compare Baraka to James Baldwin and recognize him as one of the most respected and most widely published black writers of his generation. Others have said his work is an expression of violence, misogyny, and homophobia. Regardless of viewpoint, Baraka's plays, poetry, and essays have been defining texts for black culture. Baraka's brief tenure as Poet Laureate of New Jersey (2002â2003) involved controversy over a public reading of his poem "Somebody Blew Up America?", which resulted in accusations of anti-Semitism and negative attention from critics and politicians.

Elijah Muhammad (born Elijah Robert Poole; October 7, 1897 â February 25, 1975) was a black religious leader who led the Nation of Islam (NOI) from 1934 until his death in 1975. He was a mentor to Malcolm X, Louis Farrakhan and Muhammad Ali, as well as his own son, Warith Deen Mohammed.

Ronald Vernie Dellums (1935 â 2018) was an American politician who served as Mayor of Oakland from 2007 to 2011. Ralph Abernathy (1926-1990) was a Baptist minister who, with Martin Luther King, Jr., organized the historical Montgomery bus boycotts. He co-founded the Southern Christian Leadership Conference and was a major Civil Rights figure, serving as close adviser to King and later assuming SCLC Presidency.

Albert B. Cleage, Jr. (1911 â 2000) was an American Christian religious leader, political candidate, newspaper publisher, political organizer, and author. Cleage, who changed his name to Jaramogi Abebe Agyeman in the early 1970s, played an important role in the Civil Rights Movement in Detroit during the 1960s and 1970s. He became increasingly involved with Black Nationalism during the 1970s, rejecting many of the core principles of racial integration.
Marks
On recto: typewritten title and date.
Materials
Wire photographs were originally transmitted over phonelines, then later, by satellite. They were first used in the early 1920s. Associated Press became a leader with this. After pigment touch-ups, etc., the print is put into a drum (like a drum scanner). The image gets converted into audio tones that are transmitted. The tones are received and beamed onto photo-sensitive paper. Wire photographs are copies without originals---they are hybrid, transmitted objects. (Britt Salvesen, Curator and Department Head, Photography Department, Los Angeles County Museum of Art, March 30-31, 2022)
Keywords Click a term to view the records with the same keyword
This object has the following keywords:
Amiri Baraka, Black Journal, Civil Rights Movements, Dick Gregory, Dick Gregory, Honorable Elijah Muhammad, Injustice, Male Portraits, Nation of Islam, Racial Discrimination, Reverend Albert Cleage, Reverend Ralph Abernathy, Reverend Ralph Abernathy, Ronald Dellum
Dimensions