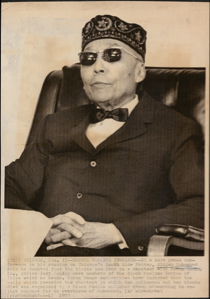 At a press conference in his Chicago mansion, Elijah Muhammad said he doubted that blacks involved in a shootout with Baton Rouge police were members of the Black Muslims Nation of Islam, January 15, 1972
Vintage wire photograph on paper
9 15/16 x 6 15/16 in. (25.24 x 17.62 cm)

Commentary
Doubts Muslims Involved: At a rare press conference in his mansion on Chicago's South Side, Elijah Muhammad said he doubted that blacks involved in a shootout with Baton Rouge, Louisiana police last Monday were members of the Black Muslims Nation of Islam, which he heads. Baton Rouge authorities have insisted that the rally that preceded the shootout was organized by a Black Muslim splinter group attempting to enlist support for an overthrow of Muhammad. Two policemen and two blacks died in the shoot out.

Elijah Muhammad (born Elijah Robert Poole; October 7, 1897 â February 25, 1975) was a black religious leader, who led the Nation of Islam (NOI) from 1934 until his death in 1975. He was a mentor to Malcolm X, Louis Farrakhan and Muhammad Ali, as well as his own son, Warith Deen Mohammed.
Bibliography
Variant illustrated: Associated Press ID #720114051
Marks
On recto: typewritten title and date.
Materials
Wire photographs were originally transmitted over phonelines, then later, by satellite. They were first used in the early 1920s. Associated Press became a leader with this. After pigment touch-ups, etc., the print is put into a drum (like a drum scanner). The image gets converted into audio tones that are transmitted. The tones are received and beamed onto photo-sensitive paper. Wire photographs are copies without originals---they are hybrid, transmitted objects. (Britt Salvesen, Curator and Department Head, Photography Department, Los Angeles County Museum of Art, March 30-31, 2022)
Keywords Click a term to view the records with the same keyword
This object has the following keywords:
Baton Rouge, Black Muslims, Civil Rights Movements, Honorable Elijah Muhammad, Injustice, Male Portraits, Nation of Islam, Police, Press Conferences, Racial Discrimination, Shootings, South Side
Dimensions