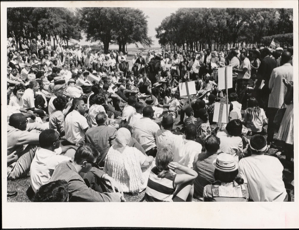 Civil Rights demonstrators waited for the start of the march to the center of Chicago's Loop. They were marching to City Hall to protest Mayor Richard Daley's retention of Superintendent of Schools Benjamin Willis., July 13, 1965
Vintage ferrotyped gelatin silver print on paper
6 1/2 x 9 9/16 in. (16.51 x 24.29 cm)

Commentary
A crowd of Civil Rights demonstrators listened to speeches and waited for the start of the march to the center of Chicago's Loop. In the third day of demonstrations, protestors stormed from the sidewalk and held a mass sit-in at the intersection of State and Madison, resulting in the arrest of nearby 200 people. The group was marching to City Hall where they wanted to protest Mayor Richard Daley's retention of Superintendent of Schools Benjamin Willis.

Benjamin C. Willis, Superintendent of Schools in Chicago in the 1960s, was accused of perpetuating segregation by refusing to move black children into white schools. Willis presided over Chicago's schools in the era of court-ordered desegregation, after the Supreme Court decision in Brown v. Board of Education in 1954 and passage of the Civil Rights Act ten years later. His critics charged that he purposely kept black children at overcrowded schools in the inner city, while spaces went begging at schools in white neighborhoods. To many Civil Rights leaders, who led protests against Mr. Willis from 1963 to 1965, his 13-year tenure as superintendent was symbolized by the 625 mobile classrooms he established to alleviate overcrowding at mostly-black schools on Chicago's South Side. The critics called the mobile classrooms ''Willis Wagons.'' In 1963, protests broke out when Civil Rights leaders and black students accused Mr. Willis's administration of fostering segregation in the schools. Protesters burned mobile classrooms, boycotted classes, went on hunger strikes and picketed Mr. Willis's home. The Rev. Dr. Martin Luther King, Jr. led some of the protests against Mr. Willis. At the 1963 March on Washington, 3,000 Chicagoans strode down Pennsylvania Avenue chanting ''Down with Willis.'' For three stormy years full of similar upheavals, Mr. Willis kept his post, finally leaving in 1966, four months before his term was to end.
Marks
On verso: manuscript title and newspaper caption with date stamp affixed.
Materials
Ferrotyped prints have a sensitive surface, usually shiny and thinner, because they are put through a press while still wet. Ferrotyping makes the surface of the photograph smoother. Light does not scatter as much on a smoother surface, so this increases contrast. That makes ferrotyped images better for press photography.
Keywords Click a term to view the records with the same keyword
This object has the following keywords:
Benjamin Willis, Chicago City Hall, Civil Rights Movements, Education, Injustice, Loop, Madison Street, Protesters, Racial Discrimination, Richard J. Daley, Sit-ins, State Street, Street Scenes
Additional Images Click an image to view a larger version

Your current search criteria is: Keyword is "RNA".