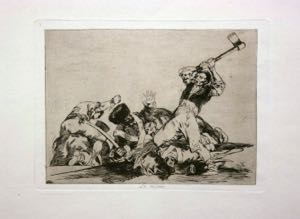 In 1804, Napoleon Bonaparte declared himself Emperor of France; in 1808 he invaded Spain. Sending the royal family into exile, he installed his brother Joseph on the Spanish throne. This action incensed the native populace and precipitated the Spanish War of Independence. Between 1808 and 1813, Spaniards fought a guerrilla war against the greatest army in Europe to free themselves from French domination. From the beginning of the War until about 1820, Goya worked on the 80 prints he would call Los Desastres de la Guerra (The Disasters of War). Rather than depicting heroic soldiers and scenes of glorious battle, Goya produced stark, sobering images of brutality, slaughter and misery. His images exposed the horror of war, from the ferocity of village fighting (plates 2-27) to the terrible famine that ravaged Madrid in 1811-12, claiming 20,000 lives (plates 48-64). In the "caprichos emphaticos" (plates 65-80) the artist comments on the war's political, religious, and ideological aspects and ramifications. With a stark intensity unprecedented in the history of art, these prints convey the barbarity and futility of war. No one is spared from man's inhumanity toward man, and no death is glorious. Los Desastres de la Guerra were not published during Goya's lifetime, possibly because the artist feared that some of the prints were politically dangerous or, perhaps, because he knew that the nation was too tired of war to be responsive. The prints finally appeared in 1863, revealing a theme that would continue to be expressed in the art of the twentieth century: the suffering of civilians when war is no longer confined to the battlefield.